Today’s discussion began with the video pieces in these two blog posts.

These videos have been created from a preliminary set of footage that was shot in my back garden and my plans are to shoot video with the Wildling on site and also using green screen.

Jonathan observed the progression that I had intended moving throughout the nine videos and we spoke about the potential for further development. Some of the discussion was spent comparing the two video’s (6 and 9) in the second blog post and the potential for continuing with both these lines of enquiry. Video 6 having a more painterly and almost abstract effect where the image is akin to oil being poured onto water and Video 9 being more humanistic.For the time being I will probably continue to expand on both of these as I see future potential in either direction.

We spoke about the potential of layering this type of footage over the painterly effects found in video 6 (see link above) and using a blur layer to soften the lines in this video too.

We also discussed my ideas around the use of a green screen and a green body suit to create a different effect (which I have already priced) and Jonathan spoke about the use of contrast to be able to achieve the same effects, which brought me onto the drone footage that I have shot where there is the contrast that will provide the required effects.

Getting back to the drone footage, again this is just a clip of the first outing of my new drone, we both agreed that there is something special about parts of this footage and in particular when the sun is behind the camera and the shadows can be seen in the images. Also the trees at the location we used provide an additional interesting quality to the footage.

Jonathan did ask me where I see this going as it progresses and I discussed my recent reconnection with spirituality and the fact that although these videos are addressing a particular context, they are beginning to evolve and speak about issues of consciousness and other-worldly beings – I see this progression happening quite naturally almost as if by accident, but actually not. I also spoke about how I have always believed that the art and the spiritual would integrate at some point and that I’m starting to see this happen in my artwork now.  Jonathan also emphasised the importance of holding onto this connection with the spiritual and that this essence provides a deeper level of perception within the artwork.

We  spoke about the qualities of  the resin work in Latex and Resin and the objects being suspended in the resin like they would be suspended in time beneath the reservoir waters. The use of silicone to make the moulds for when I plan to create large multiples of the pieces made so far. I also mentioned my idea for creating a larger resin piece that suspends multiple items rather than individual items.

As time was running out we briefly spoke about the Citrasolv and the Experimenting with Poloroids work and the potential with both of these to create images that I can then print large scale onto net curtain fabric and then stitch onto.

Overall Jonathan asked me how I felt about how things were going so far and I spoke about the fact that I had spent a lot of time making so far and that this has provided me with the space and material to focus on the video work. We spoke about the way I am using traditional making methods then transforming that material into digital and the two-way connection between the two and the importance that maintaining that connection with the traditional has for me. I do have a lot of material that I can use to further this now and several ideas that can be progressed towards the final show next year.

Overall extremely happy with the tutorial discussion and it has been a great opportunity to reflect more fully on the work that I have produced since January.

Thinking further about ways to preserve all the rusty objects and the idea that these had been encased in the mud at the base of the reservoirs for decades I began thinking about ways that we preserve sentimental items. Resin was an obvious choice to me for experimentation.

I began by making two moulds one from a house brick and the other from a cast iron water grid that I had acquired previously.

Once the moulds were made I missed the pouring resin and poured an initial layer into the brick mold before leaving to gellify. At this point I laid my sample rusty object in the Mold and poured the second layer before leaving for 24 hours to cure. 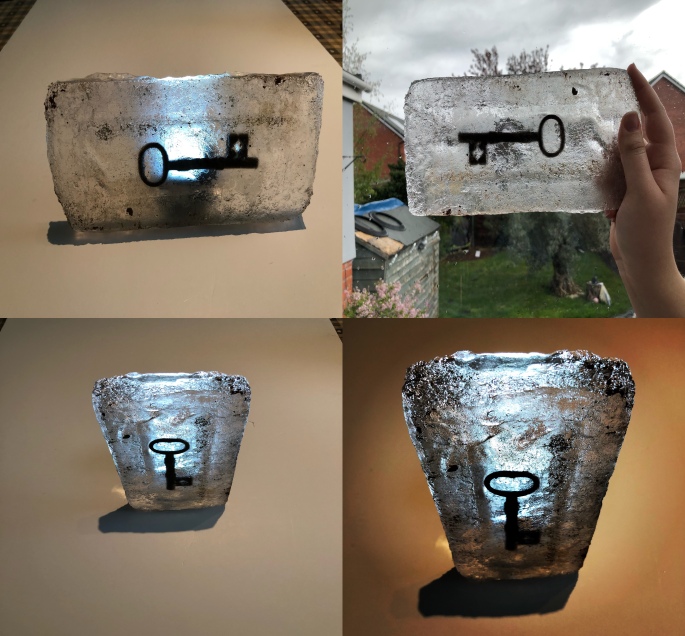 The water grid I simply cast in its own right as I feel this has conceptual meaning if it’s own and if replicated could infer the many households who continue to benefit from the reservoir waters.

Some of the latex in the water grid stuck in the resin and has ripped the mold a little.

I could have done with using a wax releasing agent to ensure that the latex did not stick. Also if I’m thinking about replicating this many times a rubber mold would be a better option, possibly silicone.

Overall especially pleased with the effect and see potential with lighting from behind. Definitely would like to create repeated patterns with these.

Reading up on what to consider when using resin.