Select one of the lecture topics from Semester One from which to explore and analyse the work of a single artist. You should restrict your analysis of their work to a key period and consider how it could be analysed and discussed from different perspectives.

Since the introduction of Social Media into the modern world, the Activist Artist has been able to promote social, political, economic or environmental reform to a global audience. This Essay explores the use of Social Media by Ai Wei Wei to support his activism and his artwork.

Since 2005 Ai Wei Wei, in particular, has used Social Media platforms to communicate his political and social messages to a global community with the intention of bringing about social change. However, this global attention to his work has placed him personally at great risk and brought about a difficult relationship with the Chinese Authorities, who censor the availability of Social Media within their geographical borders.

Ai Wei Wei uses his popularity on social media to bring the world’s attention to ongoing refugee crises and uses somewhat shocking imagery to evoke a psychological response from his audience, the concept of which has been considered by artists for some time, but is even more prevalent today’s world with the continued use of Social Media and the Internet to campaign for political or social change.

This essay discusses the event of the Sichuan Earthquake and the period following from 2008 to 2012 and the use of social media platforms and contemporary art form by Ai Wei Wei to bring awareness to the students who were not named by the Chinese Authorities when they released the official student death toll and the scandal surrounding the structure of the school buildings that collapsed.

Completed the Draft version of my essay to be forwarded to Helen for review. After a few small changes to spelling from Helen, she has confirmed this is okay to submit as a Final Copy.

Statistically, there are there are 1897 words in the document that are either the Synopsis, References or Actual Quotes. Leaving 2052 words actual content. 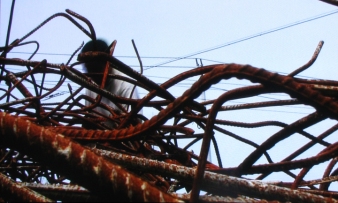 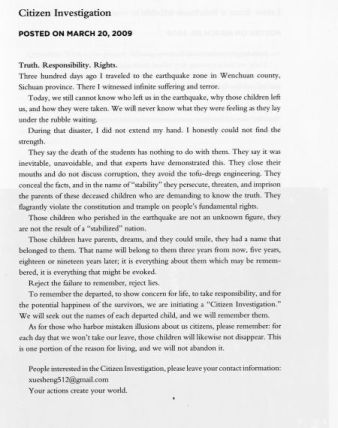