After feedback from Emrys and Helen about the Contextual Studies 2 (ARF 501) Presentation I have spent some time thinking about Richard Long.

Richard Long also has an affinity with nature and his work, which is often a documentation of his walks in the landscape, is about his interaction with the environment. While some of Richard Long’s walks are recorded by a photograph others, such as In the Clouds 1991 are text based. These pieces are sparse in nature, with a handful of words chosen to describe the long walks the artist makes all over the world.

My only knowledge of Richard Long is from the “A Line made by Walking” piece that he created in 1967.

A Line Made by Walking exists now only in a photograph. This, too, is part of the iconoclastic nature – and the imaginative power – of Long’s art, that it is often as transient and impermanent as anything in the natural world around it. The grass has long since grown back over the track he left that day in a field of wild flowers somewhere in England. It is quite conceivable that no one else actually saw the original work, or, if they did, recognised it as his, or indeed, as a work of art at all.

“The work often has all kinds of echoes,” Long says, “some accidental. If you undertake a walk, you are echoing the whole history of mankind, from the early migrations out of Africa on foot that took people all over the world.”

“All truly great thoughts are conceived by walking,” wrote Nietzsche. Richard Long’s great thought while walking was to make his walking into his art. In an illuminating catalogue essay for Heaven and Earth, Nicholas Serota, director of the Tate, writes, “In A Line Made by Walking (1967), a work made at the age of 22, Long changed our notion of sculpture and gave new meaning to an activity as old as man himself. Nothing in the history of art quite prepared us for the originality of his action.”

This formative piece was made on one of Long’s journeys to St Martin’s from his home in Bristol. Between hitchhiking lifts, he stopped in a field in Wiltshire where he walked backwards and forwards until the flattened turf caught the sunlight and became visible as a line. He photographed this work, and recorded his physical interventions within the landscape.
Although this artwork underplays the artist’s corporeal presence, it anticipates a widespread interest in performative art practice. This piece demonstrates how Long had already found a visual language for his lifelong concerns with impermanence, motion and relativity.

When Emrys first mentioned Richard Long in the presentation I gave, I was a bit unsure where the link to this artist would be, however as I began to research him it became quickly apparent that I could see not only a link to his outdoor work but also his Textworks as well, I began to see the connection to Richard Long more clearly.

He mediates his experience of these places, from mountains through to deserts, shorelines, grasslands, rivers and snowscapes, according to archetypal geometric marks and shapes, made by his footsteps alone or gathered from the materials of the place. These walks and temporary works of passage are recorded with photographs, maps and text works, where measurements of time and distance, place names and phenomena are vocabulary for both original ideas and powerful, condensed narratives.

This lithograph and screen print, which measuring 189.50 cm high, stands roughly the size of a man and catalogues a series of experiences noted during a sixty-minute walk. The number 60 runs throughout the piece, which features 60 lines of texts and was then reproduced into 60 prints. With this repetition, Long draws our attention to the temporal quality of this walk, presenting us with one descriptive word or phrase for every minute of his journey, describing what he saw, heard, felt, and did.

The letters sit atop a black and gray background which Long created by applying ink onto the surface directly with his fingertips. Against this minimal background, each line contains only one to three words, making the text long and narrow as if the words are walking down the original path in Big Bend, Texas.

Long experiments here with a different process of recording his actions; rather than photograph the walk, he wrote a poem and then presented that poem in a way that recalls the physical experience of the original in simple terms. The words are concise and the background of the poem is a monochromatic, gestural expression. Yet, the artwork still remains conceptual, as the audience can never fully envision the actual event and is left with only the poetic fragments.

His Textworks, I find particularly interesting and they have piqued my interest because of the symmetry in their design (everything always has to be symmetrical for me) and the palindromic nature, a new obsession of mine, particularly with poetry is the palindrome. 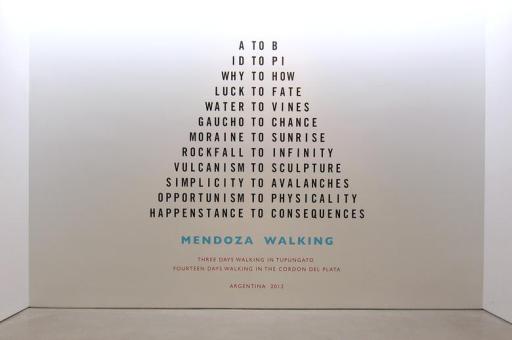 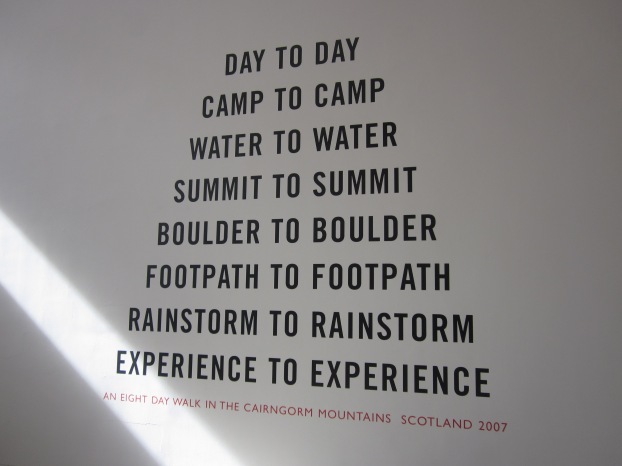 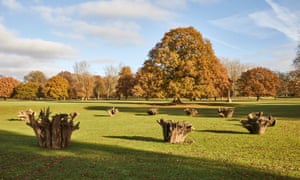 Houghton Hall is a venerable stately home these days, but White Deer Circle, as this work is called, is new – created by Richard Long for an exhibition that, unusually for this visionary land artist, is being held outdoors. His stump circle is an uncanny echo of a Seahenge, an ancient wooden circle discovered on a beach 12 miles away. Amazingly, Long, who this year marks 50 years of showing his walking-inspired work, has never heard of the bronze age relic. Perhaps Long is listening to the landscape more closely than most, though, for he is unsurprised by such serendipity.

They accompany the permanent long sculpture, ‘Full Moon Circle‘, which was commissioned for Houghton in 2003. There will also be large mud works in the outdoor colonnades and smaller-scale works in gallery spaces, as well as historic material relating to the artist’s career.

The sturdy splendour of the Stone Hall currently has even more to draw the eye. Richard Long, the British land artist, has installed a work beneath the chandelier as part of his summer show at Houghton, Earth Sky. This particular piece stops you in your tracks more than the others – it’s a black, white and grey circle of rocks, formatted as compass coordinates. It brings the wild irregularity of nature inside, but ordered perfectly, as if by magic. “I will certainly miss this piece when it’s gone,” says Rocksavage. “It’s an incredible architectural intervention.”