Attending the Processions event with our collective banner in Cardiff. 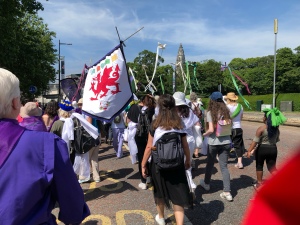 Attending the final workshop to help create the banner for the Processions event taking place in Cardiff.

Today I machined my four letters in anticipation of the workshop on Saturday. My sewing machine keeps dropping stitches and is in desperate need of a service, I did clean and oil my machine and adjusted the tension, which helped a little, I decided just to “Keep Going” despite the dropped stitches to get the letters completed.

I attended the second workshop and took my two letters to add to the collective banner. During the morning we reviewed what had been completed already for the banner and we came up with a slogan, Dal Ati, Keep Going. I decided to take away four letters with me this time, the word Keep.

Having taken away two letters to contribute to the banner I decided to make them today. Had a few hiccups then decided to just use my sewing machine. Originally we had discussed doing a large L and a smaller L – my contribution been the first two letters in the word Llandudno – so I di this and then thought the lowercase L looked like an I – so I decided to do a second upper case L then Melanie has the option to choose.

Today I attended the first of the banner making workshops. We spent the day considering the changing role of women over the past 50 a Years and making decisions about what was to go on our banner.

Although I don’t have a lot of time, I’m hoping to attend these Banner Making Workshops with Melanie Miller.

You are invited to play your part in PROCESSIONS – one of the largest participatory artworks ever created. CALL in partnership with MOSTYN is delighted to announce our support for PROCESSIONS, a mass participation artwork to mark the centenary of the Representation of the People Act, which gave the first British women the right to vote. The banner-making workshops will focus on text and textiles, echoing the practices of the women’s suffrage campaign and will be spaces to consider the lives, ideas and hopes of women in the 21st century in Llandudno. Artist Melanie Miller will be creating the Llandudno banner over the course of May. Textile banner-making  Workshops :  Date: 12th, May Time: 11am-4pm Location: 10 Vaughan Street, Llandudno LL30    What will the participants be doing? Join Melanie Miller to design and make a textile banner to celebrate the centenary of women getting the vote. The workshops will start with a session to discuss the ideas, concerns, and hopes of women in the 21st-century.   What materials will you use? A variety of fabrics and threads. You will be introduced to a range of sewing techniques including bonding, appliqué and embroidery. Each participant will contribute a stitched element to the banner.   What product will you end up with? We will create a communal banner to be carried on the procession in Cardiff on 10th June; depending on the number of participants we will also create individual items to take to the procession, such as pennants and aprons.   All skill levels welcome. The workshops are set up so that participants can attend one, two or three sessions.   For more information and if you wish to register to be part of the Cardiff event  please go to: http://www.processions.co.uk #PROCESSIONS2018, @processions2018, @ArtichokeTrust, @1418NOW or email info@cultureactionllandudno.co.uk PROCESSIONS is commissioned by 14-18 NOW and produced by Artichoke. With support from the National Lottery through Arts Council England and the Heritage Lottery Fund, and from the Department for Digital, Culture, Media and Sport. PROCESSIONS Cardiff is produced by Artichoke in partnership with Festival of Voice and Wales Millennium Centre. 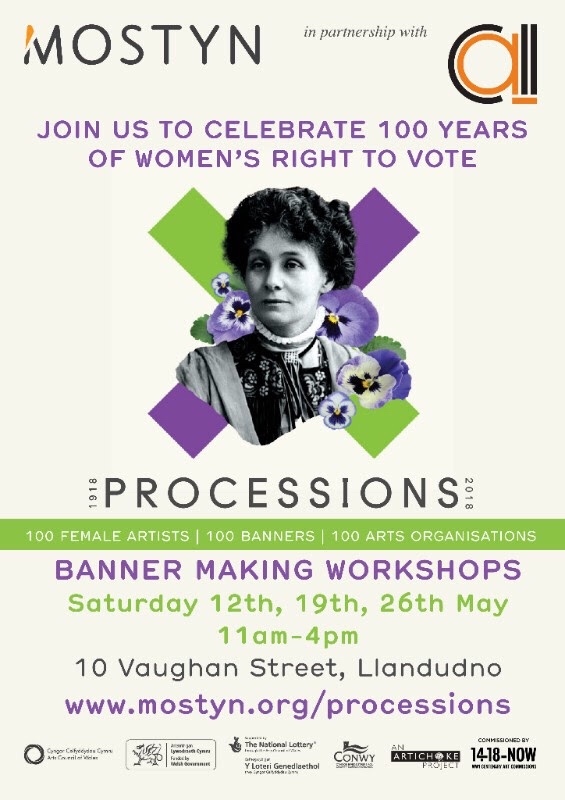 One thought on “CALL: Processions”