Artworks in which the human body is the central focus or medium. In the 1960s, contemporary artists such as Vito Acconci and Bruce Nauman reacted to Modernism’s rejection of the human form by focusing on the body, notably through performance. Other artists known for foregrounding the body include Matthew Barney and Marina Abramović.

The Body Presentation from Helen Jones

From the mid-twentieth century onward, our bodies have undergone two ostensibly paradoxical changes: they have expanded outward through the prostheses of electronic communication, and they have contracted to the microscopic dimension of DNA codes. The most visible, though not the exclusive, avatars of this dual movement are the Internet and the Human Genome Project. If the Internet may stand for all of the technical apparatuses that extend and expand human perception, folding themselves into the body as cyborg limbs, the Human Genome Project, whose ambition is to understand the body as a code, reinvents the organic self as a malleable machine that may be engineered and re-engineered. In new scholarship in the history of science and literary studies, these developments have been intensively analyzed in terms of the cyborg (Donna Haraway) and the posthuman (N. Katherine Hayles), but little work has been done to understand how they generate new forms of visuality.

If the 1980s were characterized by an emphasis on identity politics, and the representation of stereotypical subjectivities in order to dissect and undermine them, it is my belief that much of the most provocative art of the 1990s emerged indirectly from the simultaneous expansion and contraction of the body I have cited. Bodies have been remapped and disseminated. “Identity” can be counterfeited on the Internet, or situated on the level of sequences of proteins which are too infinitesimal, and too abstract, to correlate comfortably with a coherent body warranted to a coherent self. I believe that this condition has haunted art practices in which bodies manifest indeterminate and hybrid mixtures of genders, species, and machines. How do we evaluate this work in light of the questions of authorship, appropriation, and identity which have motivated much of the most progressive art of the last twenty-five years.

Is there a politics of the posthuman, and if so, what is it?

Franko B works in a wide variety of media His work focuses on the visceral. Franko B uses his own blood as a medium. He makes his body into a canvas in an attempt to portray “the pain, the love, the hate, the loss, the power and the fears of the human condition”.

TRANSFIGURATION
« the human visage / hasn’t yet found its face / and that it behooves the painter  to find it in its place » Antonin Artaud
The transformation of the « Holy Face » into the ‘Meat Head‘
First time  in the studio in june 1999, Transfiguration is the story of a failure.
The inability of a painter-sculptor to give life to his work.
In a desperate gesture, the painter goes under the paint-clay to become a living sculpture
his body become as a canvas: Now the painter is a dancer. »
From Helen Jones Presentation

Orlan is a performance artist who uses her own body and the procedures of plastic surgery She is transforming her face, her aim is not to attain a commonly held standard of beauty.
, a self-portrait in the classical sense, yet realized through the technology of its time. Lying between disfiguration and figuration, it is an inscription in flesh, as our age now makes possible. No longer seen as the ideal it once represented, the body has become an ‘modified ready-made’. 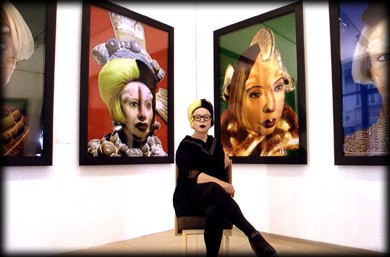 South African artist Marlene Dumas has cultivated a unique position within the world of figurative painting since the early 1980s, focusing on how the human body is translated into an image.

Dumas does not use models, but instead takes her images from mass media and popular culture sources, particularly newspapers and television.

According to Dumas, “what interested me was to make a statement about peoples’ frames of mind and the relationships between them.”

Dumas’ pictures impress with their urgent realism–but within their provocative energy lurk provocative questions about gender, identity, oppression, sexual and ethnic violence, and the situation of women and minorities 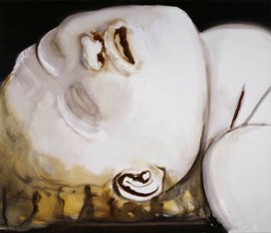 Jenny Saville: With the transvestite I was searching for a body that was between genders. I had explored that idea a little in Matrix. The idea of floating gender that is not fixed.

The transvestite I worked with has a natural penis and false silicone breasts. Thirty or forty years ago this body couldn’t have existed and I was looking for a kind of contemporary architecture of the body. I wanted to paint a visual passage through gender – a sort of gender landscape. To scale from the penis, across a stomach to the breasts, and finally the head. I tried to make the lips and eyes be very seductive and use directional mark-making to move your eye around the flesh. 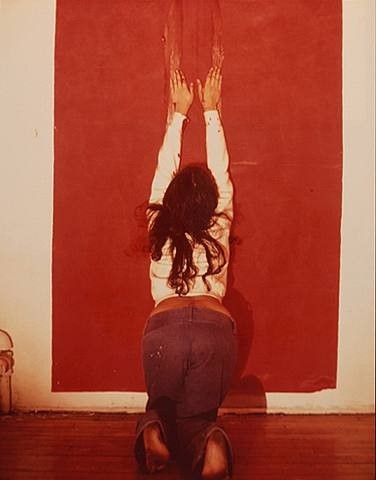 Artists who focus on the Aging Body

“Despite her great beauty, my mother, like most people, struggled many times in her life. Then, she had to learn how to cope with the failure of her own body.

Yet, in spite of her illness, my mother was widely adored as a bright, lively and wildly fun character and was my muse throughout my career.”

I didn’t realize when I began this project five years ago that I would end up embracing it as a tribute to my life of 70 years, to living long enough to have experienced marriage, motherhood, grand-motherhood, satisfying creative work, deepening love, good friends, a twilight romance.

I thought I was simply chronicling my aging. When I began showing the work, it seemed to resonate with all ages. I also shocked some with the sight of naked older bodies. I am obviously comfortable around nudity. I feel it is a natural aspect of life.

“I started with photographing my body … face, hair, torso, hands, feet. I expanded these to include pictures of my daily life, my partner, my fears and fantasies and dreams.”

“When I was in my 30s a friend talked about being in her ‘invisible 40s.’ At that moment, with two young children very attached to me, I couldn’t conceive that anything in my life would change. 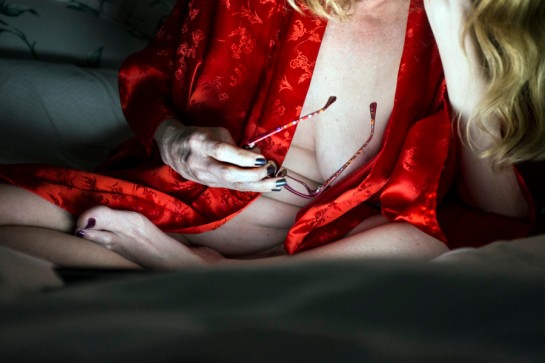 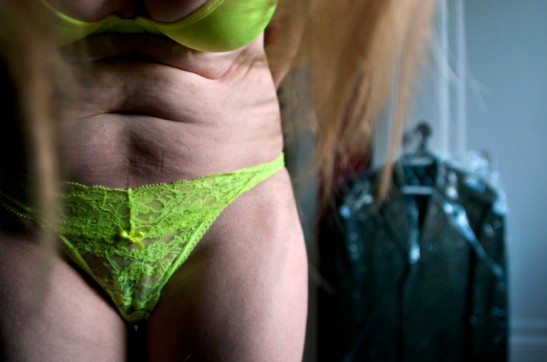 I felt vibrant and necessary. I’m older now and it shows. My most fertile years are behind me. There’s also been a shift in way I think about and carry myself …

This series is an extension of that idea and one that allows me to take stock of where I am right now — as a parent, a partner and a woman at midlife.”

“I am continuously obsessed by the sloughing of the body through time. In fact, I don’t like to represent in a drawing the oldness itself but rather the passage of time that ends necessarily in this human state. 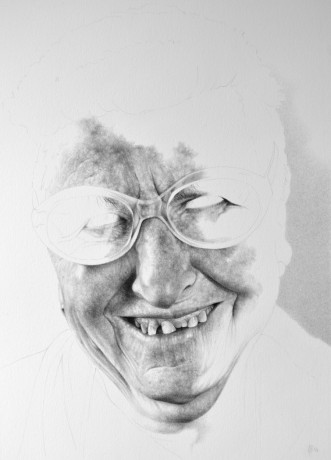 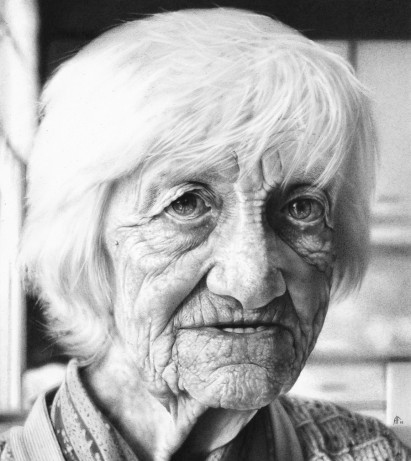 I am deeply in love with the human body, with the skin — its most external layer, that absorbs and records all the experiences of our life — but most of all I am interested in a body’s evolution, its transformation, throughout the years.

I am intrigued by the signs, lines, points, which enrich our cutis year after year and testify all the changes of our lives.”

The human face, with all its softness, contortions, wrinkles and sags, is the subject matter of Jelena Bulajics’ minutely accurate paintings.

Each canvas is filled with the faces of people she spots in the street, or encounters in daily life, whose character, look, or empathy catch her interest.