One compact definition is postmodernism rejects modernism’s grand narratives of artistic direction, eradicating the boundaries between high and low forms of art, and disrupting genre’s conventions with collision, collage, and fragmentation. Postmodern art holds all stances are unstable and insincere, and therefore irony, parody, and humor are the only positions critique or revision cannot overturn. “Pluralism and diversity” are other defining features.[31]

postmodernism is used to describe the changes that took place in Western society and culture from the 1960s onwards that arose from challenges made to established structures and belief systems. In art, postmodernism was specifically a reaction against modernism which had dominated art theory and practice since the beginning of the twentieth century.

Deconstructive postmodernism seeks to overcome the modern worldview, and the assumptions that sustain it, through what appears to be an anti-worldview. It “deconstructs” the ideas and values of Modernism to reveal what composes them and shows that such modernist ideas as “equality” and “liberty” are not “natural” to humankind or “true” to human nature but are ideals, intellectual constructions.

This process of taking apart or “unpacking” the modernist worldview reveals its constituent parts and lays bare fundamental assumptions. Questions are then frequently raised about who was responsible for these constructions, and their motives. Who does modernism serve?

Modernist culture is Western  its orientation, capitalist in its determining economic tendency, bourgeois in its class character, white in its racial complexion, and masculine in its dominant gender.

Deconstructive postmodernism is seen perhaps as anti-modern in that it seems to destroy or eliminate the ingredients that are believed necessary for a worldview, such as God, self, purpose, meaning, a real world, and truth. (This point of view, though, that we need a worldview comprised of notions of God, self, purpose, etc, is itself a modernist one.)

Deconstructive postmodern thought is seen by some as nihilistic, (i.e. the view that all values are baseless, that nothing is knowable or can be communicated, and that life itself is meaningless).

Constructive postmodernism desires a return to premodern notions of divinely wrought reality, of cosmic meaning, and an enchanted nature. It also wishes to include an acceptance of nonsensory perception.

Aspects of constructive postmodernism will appear similar to what is also called “New Age” thinking. The possibility that mankind is standing on the threshold of a new age informs much postmodernist thought.

The postmodern is deliberately elusive as a concept, avoiding as much as possible the modernist desire to classify and thereby delimit, bound, and confine. Postmodernism partakes of uncertainty, insecurity, doubt, and accepts ambiguity. Whereas Modernism seeks closure in form and is concerned with conclusions, postmodernism is open, unbounded, and concerned with process and “becoming.”

The post-modern artist is “reflexive” in that he/she is self-aware and consciously involved in a process of thinking about him/herself and society in a deconstructive manner, “demasking” pretensions, becoming aware of his/her cultural self in history, and accelerating the process of self-consciousness.

This sort of sensitivity to cultural, ethnic, and human conditions and experiences has been ridiculed by conservatives in recent years as “political correctness.” 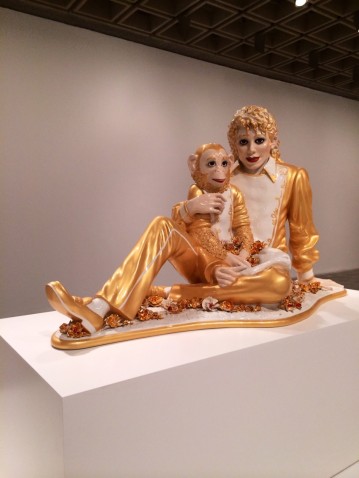 Modernism refers to the broad movement in Western arts and literature that gathered pace from around 1850, and is characterised by a deliberate rejection of the styles of the past; emphasising instead innovation and experimentation in forms, materials and techniques in order to create artworks that better reflected modern society

Postmodernism is philosophical term that also applies to the arts, architecture, and design. It is a concept that rejects the pre-occupation of post-war modernism and replaces it with purity of technique and art form. Postmodern artists tend to combine the style elements of the past, like the classical and baroque, with the modern influence of popular films and magazines. Together, the execution of their artworks often exhibits an ironic effect.

An Overview of Premodernism, Modernism and Postmodernism

Other 1970s video work includes the influential video tape Three Transitions (1973) in which the artist transforms his image in three different sequences. In this tape, Campus experiments with ‘blue screen’ technology, superimposing one image of himself upon another, with one image bleeding through into the other. The artist can be seen climbing through his own body, or breaking through his own image. In Third Tape (1976), Campus constructs and manipulates his own virtual self-image into an abstract self-portrait by filming his reflection as he progressively throws a disordered array of small mirror tiles upon a table. Campus says of this work “This man tries to abstract himself using age-old methods reminiscent of German Expressionism, Cubism and Surrealism. Art issues of line and plane are dredged up. Perhaps to be subtitled: the war between man and man-made objects.

German photographer. Gursky’s work is characterised by the tension between the clarity and formal nature of his photographsand the ambiguous intent and meaning they present, occasioned by their insertion into a ‘high-art’ environment.

During the 1980s and 1990s Gursky’s work took on an increasingly global range of subjects, and he presented his images on an ever larger scale. Through all his work runs a sense of impersonality, a depiction of the structures and patterns of collective existence, often represented by the unitary behaviour of large crowds. 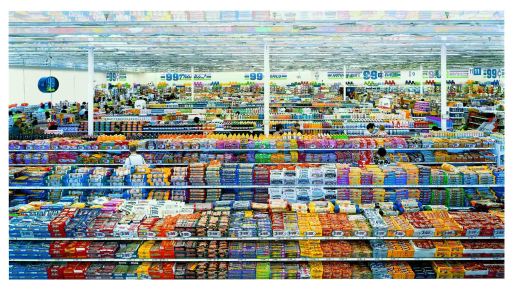 DIRECTINPUT~ This image has been directly inputted by the user. The photo desk has not viewed this image or cleared rights to the image. The image will be purged from Merlin in 14 days unless it is outputted for production or arrangements are made with the photo desk. Andreas Gursky Vancouver Art Gallery

One of the greatest art photographers of the postmodern age, the German camera artist Andreas Gursky specialises in large-format panoramic urban landscape and architectural compositions, often digitally manipulated, featuring apartment blocks, skyscrapers, sports grounds, streets, squares, and the like. Working exclusively in colour, the viewpoint used is always at a distance and slightly elevated from the front. The viewer’s gaze is not directed, so that various viewpoints are possible. His fine art photography is typically characterized by careful structuring and composition, together with a carefully balanced use of colour, perspective and light. As a result his images have an explicit painting-like quality: indeed, some have all the aura of monumental 19th-century landscape paintings.

The German sculptor, installation artist, draughtsman and teacher, Joseph Beuys was one of the leading figures in European avant-garde art during the 1960s, 70s and 80s. He was central to debates about the role of the artist in society and politics. He is best known for his plastic art – sculptures, assemblages and installations – made from “found objects” including animal felt and fat chosen by the artist as a personal if not biographical motif.

Joseph Beuys 1981 Joseph Beuys 1921-1986 ARTIST ROOMS Acquired jointly with the National Galleries of Scotland through The d’Offay Donation with assistance from the National Heritage Memorial Fund and the Art Fund 2008 http://www.tate.org.uk/art/work/AR00739

Joseph Beuys 1985 Joseph Beuys 1921-1986 ARTIST ROOMS Acquired jointly with the National Galleries of Scotland through The d’Offay Donation with assistance from the National Heritage Memorial Fund and the Art Fund 2008 http://www.tate.org.uk/art/work/AR00878

Joseph Beuys 1980 Joseph Beuys 1921-1986 ARTIST ROOMS Acquired jointly with the National Galleries of Scotland through The d’Offay Donation with assistance from the National Heritage Memorial Fund and the Art Fund 2008 http://www.tate.org.uk/art/work/AR01052

Beuys reputation as one of the most innovative postmodernist artists continued to rise during the 1970s. In addition to his political reform agenda, his unconventional use of artistic materials – including earth, blood and even dead animals – ensured him a certain notoriety. In 1972 it became all too much for the Academy who dismissed him from his position, partly also because of his insistence on admitting every student who applied. Supported by his students, Beuys protested until he was reinstated. It was agreed he could keep his title and studio but his teaching contract was ended. In 1977 he produced Tallow, one of his gigantic installations. In 1979, his international reputation was boosted considerably by a huge retrospective of his art which was held at the Guggenheim Museum, New York.

Beuys continued to live life at a hectic pace, exhibiting his installations, giving lectures and participating in controversial political activities. In late 1981 he embarked on his last major project – in effect, a piece of land art – which involved the planting of 7,000 oak saplings (many of which can still be seen in Kassel), each next to a stone block. Its message concerned the innate changeability of sculpture – over time, the tree grows while the stone becomes covered with moss and shrubbery. In fact, the initial artwork for this project was Beuys’ protest installation entitled Town Afforestation not Administration (1982), which comprised 7,000 basalt blocks dumped on the Friedrichsplatz in Kassel. He undertook its removal once an oak sapling was planted in respect of each block.

Postmodernist art represents a completely new chapter in the history of art. It is NOT a continuation of, or a contemporary version of, traditional painting or sculpture – it’s different, new, avant-garde, challenging and (as far as possible) instant! It has its own NEW set of values or aesthetics. That’s why not all contemporary artists are postmodernist, because some are still quite traditionalist in both their media and their values.

So what makes a postmodernist artist?

First, he (or she) is likely to be working in one of the contemporary visual arts, such as: installation, assemblage, conceptual art, video, animation, film, glass-making, performance, happenings, graffiti, body art, land art, and so on. Alternatively, if he works in one of the more traditional media, like painting, sculpture, printmaking, mosaics, tapestry or ceramics, he is likely to work with unconventional materials, or at least according to a new set of aesthetics.

Second, postmodernist artists tend to work with new image-based technologies, including television, video, LEDs, i-phones, screenprinting, computers, and the Internet. They source, manipulate and process imagery, rather than simply create it from scratch. Postmodernism isn’t about painting the Mona Lisa, rather it’s about sourcing a computer graphic of the Mona Lisaand superimposing it on a slice of toast while singing a Scottish lament.

Third, postmodernist art believes in a relatively dumbed-down approach, in order to ensure democratic ‘access’ to art. So postmodernism prefers artists to use instantly recognizable objects whenever possible: pickled sheep or sharks are good options, so are crowds of of nude bodies, maggots, skulls, heaps of dead flies, islands wrapped in pink polypropylene fabric and so on.

If some of this doesn’t sound much like “art“, don’t blame the poor old postmodernist artist. Instead, blame the museum curators, blame the art teachers, blame Joe Public for preferring populist entertainment to traditional craftsmanship. After all, like most things in life, we get the sort of art we deserve.

The following were taken from http://the-artists.org/artistsbymovement/postmodernism)