The Pop Art in Print Exhibition is running from July to October 2017 and is hosted by Chester Visual Arts.

It will also explore Pop in other media, including printed textiles from the period, wallpapers inspired by Pop’s strong graphic character and comic book styling, artists’ books and posters. The exhibition will conclude by taking a look at the legacy of Pop in the work of more recent artists and designers.

During the exhibition, Chester Visual Arts plan to outreach to the local community and to schools in the area with a programme of events and interactive workshops engaging as many as possible in their exciting venture.

I found the exhibition to be particularly inspiring, however four pieces in particular I felt related to my own practice and provided me with ideas to move forward with.

In photographing the TV Screen, Hamilton has produced that sense of detachment and the distortion of facts and loss of information that we experience when disturbing events are reported on the media. 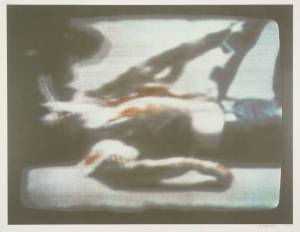 In May 1970, a series of protests against US involvement in Vietnam and Cambodia on the campus of Kent State University, Ohio, culminated in the shooting of student demonstrators by the National Guard.

Hamilton’s print was made using a photograph of a TV screen, taken during a news broadcast that day. Hamilton commented: ‘It was too terrible an incident in American history to submit to arty treatment. Yet there it was in my hand, by chance¿¿ It seemed right, too, that art could help to keep the shame in our minds.’

The interesting thing to me about this print is the muddy grainy appearance of the print that is intentional to reflect the nature of the political context of the print. Again that feeling of detachment and distance from the events that comes about when reported by the media is apparent.

The riots at Birmingham, Alabama, in the spring of 1963 were notorious across America, and with this wide publicity the event was one of the climaxes of the Civil Rights Movement. Supporters of Martin Luther King, protesting at segregation at lunch counters, were attacked by the police with dogs and water hoses, and King himself was arrested.

Warhol contributed this small print to a portfolio of work by ten artists, published the year after the riot. The image is changed only in size and status from a newspaper photograph. In the form of a print in this portfolio it commemorates the tensions in American popular life at the time, and forcefully illustrates the distance of the arts from such events.

I’m dreaming of a White Christmas by Richard Hamilton

The use of a negative of a photograph along with mark making and over painting to produce this print is particularly interesting to me and something I hope to experiment further with in my print making.

Hamilton made his first etchings and drypoints as a student in the late 1930s. Throughout the following decade he continued to use etching, drypoint and aquatint and experimented with lithography, but it was the influential screenprints incorporating photographic and hand-drawn stencils made in the 1960s which brought him international acclaim as a printmaker.

The use of photography has long been an integral part of Hamilton’s working process. This work was based on colour cine-film frames from the Bing Crosby movie Holiday Inn. The work was printed by Editions Domberger, Stuttgart and published by the artist in an edition of 75

Sara gets undressed by Julian Opie

The use of Lenticular plastic to produce almost a holographic effect on the image is of particular interest to me and I am already investigating how the three images were placed together behind the plastic to produce that feeling of movement.

Opie has regularly explored ways in which a motif can be pared down to its essence and yet remain recognisable not only in generic terms, but also in terms of retaining an identifiable individuality. His images of people – as portraits or figure studies – are drawn by him on a computer, using photographs of real people he has taken himself, in the process reducing each to its characteristic essentials described by a solid even black lines and a graphic language of basic symbols.

This is a Lambda print which has been overlaid with lenticular plastic, so that different views of the image are visible as the viewer shifts his/her position in relation to it. The first step in making a lenticular print is to prepare two or more images (here Opie has used three) which must be the same size, and using a computer program, cut them into narrow strips and interlace them in strict sequence. If, as here, the artist wants three views (also known as ‘flips’) then the first strip is taken from image 1, the second from image 2, the third from image 3, and then the fourth from image 1, and so on. It is this interlaced image which will be printed and then mounted behind a lenticular lens screen. This is a sheet of plastic on which a series of cylindrical lenses (or lenticules) have been moulded in parallel rib-like columns. Each of the lenses has a focal length equal to the thickness of the clear plastic sheet from which it has been moulded. Each lencticule thus magnifies one of the strips behind it. If you change your angle of view, then the strip which is being magnified also changes, creating an illusion of animation.

Opie’s Sara enacts a passive striptease as we watch. She belongs to a long tradition of representing the female body – and especially the female nude – in the history of art. The female body itself is an instantly recognisable motif, so familiar that it can serve as the site for experiments with form and modes of representation.