I contacted Lisa and asked about removing the work, as today is the final day of the agreed contract period. However due to other circumstances I have been asked to leave the work up for the time being. 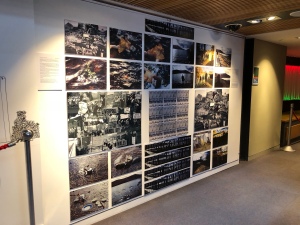 I finished adding images to the wall in preparation for the Easter holidays. There was a small issue that turned out to be a non-issue as far as I was concerned. Someone had complained about the content of one of my images and I was asked to remove it. I was however quite proud of the fact that the image had created such a reaction.

Today I added the work I have done in the past week to the Student Wall. I am really pleased with the outcome. Lisa very kindly translated my Artist Statement into Welsh. 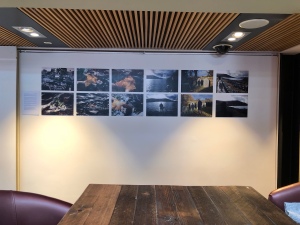 Over the weekend, I prepared several images from my photography session up at Capel Celyn and added them to the student wall. Very Pleased with the result. My next step is to begin working with the slogans used in the protests at Capel Celyn.

I also added a Brief Biography and Artist Statement to the wall.

This collection of work is part of a broader body of work which will be on display at the final exhibition at Coleg Menai, Bangor in June. The events that occurred at Treweryn in the 1960’s are relevant to the location of North Wales, with political context, not only historically but to the present day.

In 1965 Llyn Celyn was created, a reservoir that filled the Treweryn Valley. The village of Capel Celyn was drowned to provide water for Liverpool. Nevertheless, it seems that Liverpool then sold the water onto other regions in the country. These events were significant politically sparked by the Treweryn Bill. Passed in parliament this bill allowed the Liverpool Corporation to bypass local planning laws. The wishes of the Welsh people were ignored and plans continued to turn the valley into a reservoir.

Still a current topic, having recently passed a 50-year anniversary and with Brexit looming, Wales still does not have control of its own water. There are plans for this to change as a result of Brexit and claims that this could never happen again. However, with Devolution, the Welsh could categorically ensure this never happens again.

I am most touched by the unanswered protests of the residents and the fact that many of the family graves are still underwater. There continue to be many personal accounts from people who were and continue to be affected by this.

Liverpool Council did apologize in 2005, however this is widely seen as a political move with their bid for the Eisteddfod looming and too little too late.

Michelle Wright is currently in her final year of study towards a BA(Hons) Fine Art at Coleg Menai in Bangor North Wales. Photography and Video are core aspects of the artwork she produces. She considers all of her work to be of a humanitarian nature and a reflection of the way she sees the world. However, her work subconsciously considers social and political issues that arise as part of the practice she has developed.

I added a mood board to the Student Wall as a starting point for this project.

Today I met with Lisa and signed the contract for the student wall at Galeri. We also discussed my ideas for the wall. My final intention is to fill the entire wall with preparatory material towards my final exhibition in June.

I was contacted today by Lisa, the curator at Galeri to ask if I was still interested in working on the student wall. Short notice, but basically starting immediately. Although nervous I’ve decided to give it a go. I previously had an idea for this wall, so I plan to resurrect this idea and expand on it so that I can use it to practice a technique that I plan on using for my final piece.